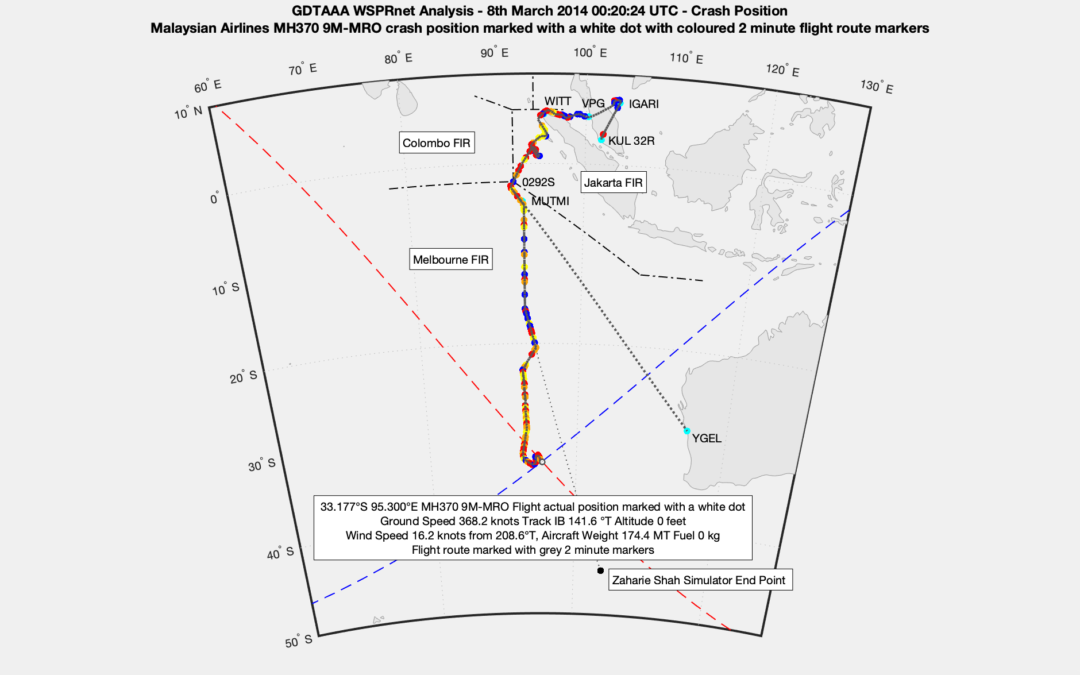 This MH370 flight path report provides the findings every two minutes during the entire flight of MH370 from 7th March 2014 16:42 UTC to 8th March 2014 00:20 UTC. The analysis used the Global Detection and Tracking of Any Aircraft Anywhere (GDTAAA) software based on the Weak Signal Propagation Reporter (WSPR) data publicly available on the WSPRnet website.

This flight path of MH370 has been described in detail with a granularity of two minute steps and accuracy within 18 nm. There are 89 candidate single link progress indicators and 35 candidate multiple link and multiple azimuth position indicators based on the GDTAAA analysis of the WSPRnet data. This results in over 200 WSPRnet links which are candidates for a MH370 detection and tracking.

Combining the Inmarsat satellite data and Boeing performance data with the WSPRnet analysis provides a much more complete view of the MH370 flight path. Further combining the joint Inmarsat/Boeing/WSPRnet analysis result with the Oceanographic drift analysis by Prof. Charitha Pattiaratchi of the University of Western Australia builds confidence because the data and analyses from different independent scientific and engineering domains all point to the same MH370 crash location at 33°S close to the 7th Arc. Blaine Gibson found the majority of the MH370 floating debris items that have been recovered from around the Indian Ocean on the basis of this drift analysis.